I've already dedicated way more time to 'lemmium' than the movement warrants, and the researchers at JINR, ORNL and LLNL as well as the good folks at IUPAC don't need a proxy without a shred of authority like me to fight their non-existent battles. So go ahead and call me the Chris Crocker for IUPAC. I don't have strong feelings on Lemmy Kilmister or Motörhead one way or the other, so I don't want to sound like I'm trying to besmirch anyone's music or legacy. This is all about a flawed premise and hypocrisy. The most recent effort by Lemmium.org is to get teachers and academics to sign a letter to IUPAC asking them to change the guidelines for naming elements to include "Any person by whose honouring the causes of science in education would be furthered." Sound great right? What educator could be against something that promotes education? Like every other educational initiative these days, it's written in STEM Tourette's. As Chemjobber is most adamant about pointing out, STEM shortages are mostly myth.

To their credit, the folks behind lemmium did their research and found out that IUPAC element naming guidelines would invalidate their original petition during the almost 1 month that naming elements has been a cornerstone issue for them. Thus the need to lobby IUPAC to change the rules before petitioning IUPAC to name element 115 'lemmium'. The problem with the premise of the "furthering education" letter, is that Lemmium.org never mentioned education before a few days ago. Since it's inception during the first week of January, this movement has always been about the music and Lemmy. No problem being a fan, but the education angle didn't crop up until February 3. Check their timeline. This letter is a misdirection and a means to the actual goal. 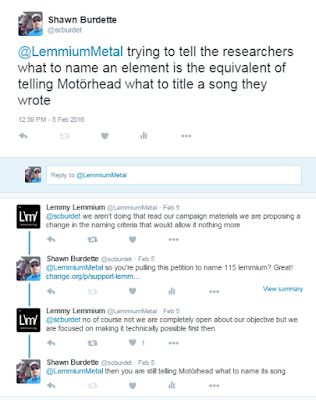 In the 21st century, we've come to appreciate the rights of artists (musicians, filmmakers, etc.) to their creative works. There was a lot of debate during the Napster "file sharing" era about whether musicians should be compensated (They should. It was stealing) and artists regularly ban politicians from using their songs. Producers and studios sometimes try to interfere with an artist's art, but that almost never results in a better product. If anyone ever petitioned a band to name one of its songs, would anyone expect the artists to bow to public pressure? This is essentially what petitioning IUPAC (or the researchers) is. The researchers working on elements 113, 115, 117 and 118 aren't mining for an unknown substance in the ground that's already there, they're using ingenuity and creativity to design experiments. I posed this question about creative ownership to @LemmiumMetal after they engaged me on a tweet about their letter. This was part trolling, part serious question, but as you can see, they never answered the question and then admitted the letter was actually about making their original (not actually motivated by education) petition feasible. Within this same conversation, another user asked "shouldn't science belong to people? Or should it stay enclosed in its ivory tower?" The use of the pejorative "ivory tower" insinuates that scientists (academics) believe they own something that rightfully belongs to everyone. This is a false equivalency between science and the procedure for naming elements. The doors of science are wide open to whoever wants to enter. That doesn't mean you get to show up at the 11th hour and claim ownership in an effort that has cost dozens of people years of blood, sweat and tears to achieve.

So aside from the distortion in motivations, is there reason to believe naming an element for educational purposes would have the desired effect? There was some simultaneous discussion going on with Kat Day about IUPAC's rules for acceptable name sources. To review IUPAC permits "Elements can be named after a mythological concept, a mineral, a place or country, a property or a scientist". We're currently engaged in a game of guessing what names the researchers might choose, and a more detailed commentary on how those predictions were made (sorry, no spoilers). If you look at trends in element naming, all of the elements discovered in the last 60 years were named after either a scientist or a place. Mineral-based names were popular when rare earth elements were being separated from ores. Since that's not the process involved in finding transuranium elements, we can exclude that from the discussion. The last time an element was named for a property was 1940 (astatine from the Greek word 'astatos' meaning 'unstable') and for a mythological concept was 1945 (promethium for the Greek god Prometheus).

IUPAC's selection of categories are a bit ex post facto as all but 32 elements were already named before the organization formally existed in 1919. The actual need for codifying element naming procedures didn't become apparent until the 1940s with the development of the technologies necessary to synthesize short-lived elements that don't occur naturally. In 1947 Friedrich Paneth outlined the ideas that would become IUPAC's guidelines, which have been modified as warranted by various discovery priority controversies. The mythology provision has fallen in popularity as the adherence to Latin and Greek as the languages of science has diminished. So is there room to add a provision to IUPAC rules to use non-scientists in place of minerals and mythology, which are likely to fall into disuse?

The Lemmium.org letter states the goal is to use lemmium to "appeal to 11–16 year olds". I question how many 11–16 year olds care about Motörhead right now, let alone in 10, 50 or 100 years. As an astute tweeter pointed out, bieberium would likely be more popular today. Some teenagers like hard rock (how Lemmy actually classified his music, not heavy metal), but a lot more like the Top 40s. Some even like country (something may be wrong with them) or alternative. The appeal of any one artist is not universal, nor is any pop culture possibility. Imagine this debate around the time that element 103 (lawrencium) was being named in 1961. Buddy Holly had died just two years before, so with the proposed changes 'hollium' or 'buddium' would have been valid homages to a musician that would appeal to the youth. You could even make the argument that the name "fits". Buddy Holly was gone too soon at 22, and element 103's longest live isotope has a half-life of 11 hours. Do today's youth know (or really care) enough about Buddy Holly that it would make them think twice about the periodic table? At best, most of them have heard the Weezer song, and there's a good chance that happened on a classic rock station since it was released in 1994. Over 20 years ago. Scary, yes? The problem with lemmium, and this proposed change in general, is that people want to graft their interests onto others under the guise of education. I seriously doubt it would work. Although perhaps not always successful, the motivation behind the IUPAC guidelines is to have names with some universal meaning.

Do we need pop culture to get young people interested in science? Dinosaurs are often a gateway to science for young people, but dinosaurs don't need names derived from music, fiction or video games to draw interest. Space exploration is another area that appeals to the youth, but how many young people would list any of the astronomical bodies named for pop culture icons if they were asked what got them interested in the universe (which has literally has more things in it to name than we ever could)? Our culture is obsessed with celebrity. Do we the entertainment industry to permeate yet another aspect of life in the hopes it will move the education needle a hair? Chemistry does need to do a better job appealing to young people. This has been discussed before. Chemistry needs a personality like Neil deGrasse Tyson to catalyze the process. Academic and industry chemists need to be in schools showing students the amazing things chemistry does. Those are the things that got me, and many other chemists, excited about doing chemistry. It will still work. If a celebrity wants to lend their name and time to the effort, welcome aboard. Just don't expect science return the favor by permanently enshrining you in element form. 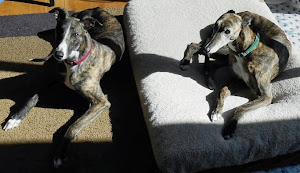